My Rating: 4 Stars Best Books of Summer 2018 Selection* Vulture * Time * New York Post * The debut of a major talent; a lyrical and emotional novel set in an archetypal small town in northeastern Ohio—a region ravaged by the Great Recession, an opioid crisis, and the wars in Iraq and Afghanistan—depicting one feverish, fateful summer night in 2013 when four former classmates converge on their hometown, each with a mission, all haunted by the ghosts of their shared histories. Since the turn of the century, a generation has come of age knowing only war, recession, political gridlock, racial hostility, and a simmering fear of environmental calamity. In the country’s forgotten pockets, where industry long ago fled, where foreclosures, Walmarts, and opiates riddle the land, death rates for rural whites have skyrocketed, fueled by suicide, addiction and a rampant sense of marginalization and disillusionment. This is the world the characters in Stephen Markley’s brilliant debut novel, Ohio, inherit. This is New Canaan.

On one fateful summer night in 2013, four former classmates converge on the rust belt town where they grew up, each of them with a mission, all of them haunted by regrets, secrets, lost loves. There’s Bill Ashcraft, an alcoholic, drug-abusing activist, whose fruitless ambitions have taken him from Cambodia to Zuccotti Park to New Orleans, and now back to “The Cane” with a mysterious package strapped to the underside of his truck; Stacey Moore, a doctoral candidate reluctantly confronting the mother of her former lover; Dan Eaton, a shy veteran of three tours in Iraq, home for a dinner date with the high school sweetheart he’s tried to forget; and the beautiful, fragile Tina Ross, whose rendezvous with the captain of the football team triggers the novel’s shocking climax.

At once a murder mystery and a social critique, Ohio ingeniously captures the fractured zeitgeist of a nation through the viewfinder of an embattled Midwestern town and offers a prescient vision for America at the dawn of a turbulent new age. 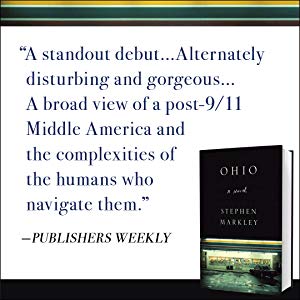 “Markley's ambitious foray into fiction reunites four high school classmates on a fateful summer night in their Ohio hometown, in what reads like a darker-themed epilog to Friday Night Lights…Markley's prose sparkles with insight and supports an intricate narrative architecture that recalls Nathan Hill's The Nix and Patrick Somerville's This Bright River…highly recommended for all literary collections.”—LIBRARY JOURNAL (STARRED REVIEW)

"Reporters have fanned out in search of answers to Middle America’s decline and Trumpist desperation, but Markley is one of the first novelists to fully reflect the social forces at work without sacrificing an iota of character work or narrative tension. Drawing on the reunion-novel tradition, he brings together four alumni of the same (fictional) Ohio high school on one momentous evening a decade after graduation, each with their own pattern of escape and return—and their own mission of repentance or retribution."—VULTURE (NYMAG.COM)

“[A] standout debut…Markley’s novel is alternately disturbing and gorgeous, providing a broad view of the anxieties of a post-9/11 Middle America and the complexities of the humans who navigate them.” —PUBLISHERS WEEKLY 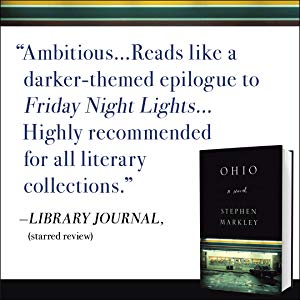 “In his bold debut novel, Ohio, Stephen Markley visits the fictional northeastern Ohio town of New Canaan to paint in vivid colors the shattered dreams and stunted lives of young adults removed by roughly a decade from their high school graduation. It's an intensely realistic and keenly observed portrait that puts a human face on subjects often obscured by statistics and expert opinion… a dark and deeply felt examination of a generation confronting problems that can't be solved quickly or with ease…it has earned a place in any conversation about the important role fiction can play in reflecting life back to us when we look squarely in the mirror.”—SHELF AWARENESS

"Markley is a knockout storyteller, infusing each section with realistic detail, from the drudgery of Walmart work to war to the fleeting ecstasies of drugs to violence, especially self-harm."—KIRKUS REVIEWS

“Stephen Markley is an expert cartographer of the American Rust Belt and the haunted landscapes of his characters' interiors. A fast-moving and devastating debut.”—KAREN RUSSELL, New York Times bestselling author of Swamplandia!

“Ohio is that rarest of unicorns, a novel that swings for the fences, and actually tries to explain just what the fuck happened to this country after the towers fell, and how we got to this awful particular moment. Stephen Markley goes for the universe with every single sentence he writes. That the universe answers him as often as it does makes for a hugely impressive first novel.”—CHARLES BOCK, New York Times bestselling author of Alice & Oliver 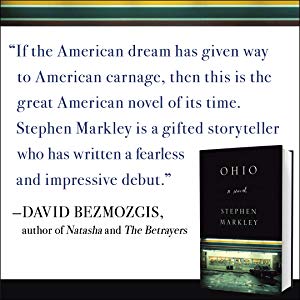 “If the American dream has given way to American carnage, then this is the great American novel of its time. Stephen Markley is a gifted storyteller who has written a fearless and impressive debut.”—DAVID BEZMOZGIS, author of Natasha and The Betrayers

“Ohio is heartbreaking, frightening, and occasionally, amidst the sorrow and horror, transcendent—a novel that casts the clearest possible eye on people haunted by who they used to be and might have become, and a country haunted by the same. Stephen Markley is unflinching.”—KEVIN BROCKMEIER, author of The Illumination

Stephen Markley is the author of Ohio: a Novel, which is forthcoming from Simon & Schuster in August of 2018. He's also the author of Publish This Book and Tales of Iceland. He is a graduate of the Iowa Writers Workshop and his essays and short fiction can be found scattered across the internet. He currently lives in Los Angeles.